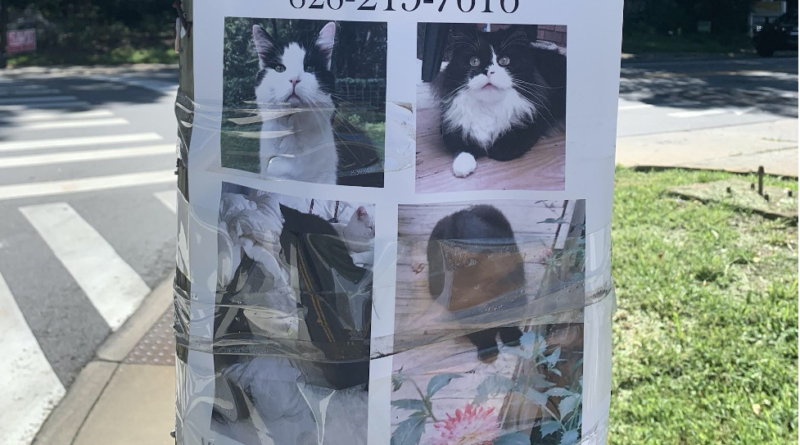 Written and photographed by Marisol Melchor

Originally published in The Blue Banner

For the residents of Charlotte Street, it seemed as though a new missing cat poster was going up every week. In the 403 Charlotton apartments, two cats went missing between May and June. Since November, there have been about nine cats reported lost in the central Asheville area.

First to go missing was Tuna Fish, a small, black, long-haired female. Her owner, Thomas Hilts, has resided in 403 Charlotton for about eight years and had never experienced any problems with wildlife or even pet thieves. She was a cautious cat, skittish toward strangers but very friendly with humans she was familiar with.

Hilts said Tuna Fish had been an outdoor cat for 15 years and finding her way home was never an issue. One night around the second week of May, Tuna Fish didn’t come home. The only trace of evidence left behind was a trail of blood droplets right outside of Hilts’ apartment.

“I think she got attacked but got away and went off into the woods to die alone,” Hilts said.

Except for the trail of blood, there were no other clues that could point the owner in the direction of the culprit. No animal or shoe prints, no remains recovered, no fur, no suspicious sightings, and more importantly no closure. Nothing except memories and pain from the loss remained.

“Ralph had spent the night out before. He especially liked staying out on full moons. I went out the next morning looking for him and he didn’t come back and I was like, ‘that’s concerning,’ and as more time went on I became more concerned, ” said Julie Douglas, Ralph’s owner.

Ralph was a rescue and also an outdoor cat. He was very friendly and was known to walk into any stranger’s apartment as if it were his own. This gave his owner, Julie, hope that he may still be alive, but she has begun to come to terms with the fact that Ralph may not come back.

403 Charlotton, located directly next to The Omni Grove Park Inn golf course, houses coyote dens. Most owners suspect that their pets were taken by these coyotes as they’re driven further and further into the city due to deforestation.

The area of Charlotte Street is still fairly populated with plenty of housing developments, bustling businesses and traffic. If there are wild animals willing to expose themselves to come to look for food it most likely means they don’t have many options.

“My neighbor said she saw him early Wednesday morning and the last I had seen him was Tuesday night. That kind of put my mind at ease because I was like well it’s probably not a coyote then because they hunt at night, but then I read when they’re in their pup season they hunt whenever,” said Douglas.

Douglas began asking neighbors around the area wondering if they’d seen Ralph or coyotes. One neighbor outside the complex mentioned they did have a coyote problem at one point but they had not seen it in some time. About a week after Ralph disappeared another cat in the area, a small orange tabby, went missing.

“I called that person actually and I was like did you find your cat and she said no,” Douglas said.

A few weeks toward the end of June, Kukui, a small black male rescue cat who was a few weeks away from turning one, went missing on Sunset Drive and Baird Street. A location close to the Omni Grove Park Inn.

“I know that it was somewhere between 4:30 a.m. and 7:30 a.m because Kukui maintained a daily schedule. He would let me know he wanted to be let out early in the morning and he would always be back by seven for breakfast,” said Lisa Lenely, his caretaker.

Once Lenely realized that Kukui was missing, she started putting up missing cat posters after contacting the chip company to let them know Kukui had disappeared.  Lenely clung to the hope that someone would find Kukui and be able to return him. Kukui, like all the other cats who have gone missing, was also an outdoor cat who enjoyed spending time away from home.

Lenely found no evidence the day following Kukui’s disappearance. Like all the other owners she believes it was most likely some sort of wild animal that took him, but still maintains her hope that his disappearance was caused by a human.

“I want to believe that someone took him because then that would mean he’s still out there somewhere and that gives me hope,” she said.