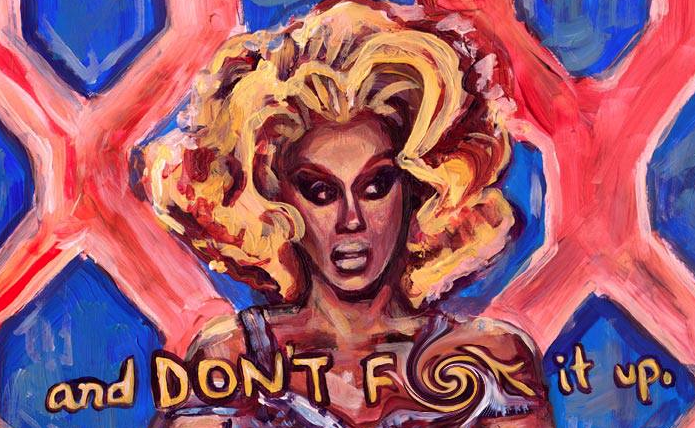 Rupal by Ursula Gullow
From the organizers:
“Pop stars exists because we need them to project our fantasies onto.” –Rupaul
Downtown Books and News will display the work of culture aficionados who have responded to an open call to make artwork about their favorite media makers, pop stars, and celebrity crushes. The original usage of the  term  “fan  art” – coined in the mid 1960’s – refers to artwork made by fans of science fiction and fantasy genres, so it’s appropriate that a bookstore host this tribute to beloved stories and media heroes.
While commonly dismissed as kitsch or trite, fan art is an essential aspect of the contemporary cultural landscape.
“The act of making art about favorite tv shows, music and media is a re-telling of narrative, similar to the way legends and myths are retold through generations and cultures. Retelling stories and remaking artworks offers us new perspectives on familiar cultural works, and it's part of our nature as human beings to imagine different versions of the same stories, 'what if' scenarios, and old tales given fresh voices.” (Lauren Davis, Are Fan Fiction and Fan Art Legal?)
The opening reception on May 1 is from An informal  discussion at 7PM on opening night  (May 1) will prompt viewers and  artists to consider the phenomenon of fan-dom – why do  some characters or media makers resonate with strongly while others  do  not?   Does the act  of materializing a hero-fantasy through art-making alleviate the obsession or make it worse? Since the adoration for cultural  protagonists (and  by extension, anti-heroes) is universal, can  the public expression of fan-dom strengthen discussion across social  demographics?

Austin-based artist  Lisette Chávez is contributing two works to the exhibit – a mixed media drawing of rocker Gene Simmons (below) and a hand colored lithograph of Prince (above). “They [Prince and  Simmons] are a huge contrast from each other that  really displays the spectrum of our daily obsessions,” says Chávez. “I see the art work as small alters or shrines -- almost how people get into  scrapbooking and  decorate the hell out  of an old photograph to make it more special. It’s also  a way to bring  someone you’ve never met into  your own reality.”

As the hash tag, #fanart demonstrates on social media sites like Twitter and  Instagram, fans often gift their celebrity crushes with the artwork  they’ve made about them, or at least  “tag” them. This “gifting” has  become an important extension of contemporary fan art. With so many  cyber platforms to connect fan to celebrity, the division  between hero and  worshipper becomes increasingly smaller. “It seems  like lots of people just want  to be noticed by that  celebrity or they want  to be complimented – or have that person acknowledge they’re alive,” says Chavez. “If someone gifted me my own portrait I think I would  be terrified.”
The call for #FANART was distributed across the  greater Asheville area and  artists  will drop off work at DBN one week prior  to the opening. At the time of distributing this press release, the complete lineup of contributing makers has  yet to be determined. Confirmed participating Asheville artists include Anna Jensen, Joyce Thornburg, Jill Cockerham, Michelle Fugate and Sherri Bell.
Opening reception: Friday May 1, 6pm-9pm with a discussion with participating artists at 7pm / Downtown Books and News at 67 North Lexington Avenue in downtown Asheville / (828) 348-7615
#FANART is organized by local artists Alanna Hibbard and Ursula Gullow, who share an affinity for reality tv, podcasts and livestream kitty cams.