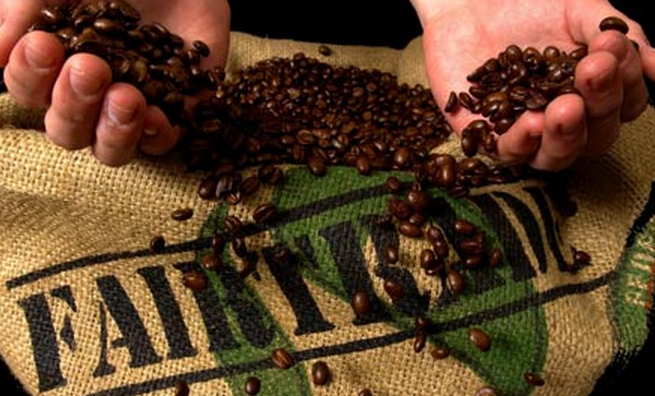 By Maggie Cramer, Farmer and Chef South Contributing Writer
Critics of the local food movement have always painted it as an all-or-nothing deal: To be a locavore, you have to shun bananas, pineapples, and the list of tasty tropicals goes on. Of course, that isn’t true. Thank goodness! We Ashevillians are local foodies to be sure, but just try and tell us we can’t have coffee and chocolate. Seriously. Try.
That doesn’t mean we’ll accept beans grown unsustainably and without transparency. Enter fair trade. Loosely defined, a fair trade product is one for which its farmer has been fairly compensated. Typically, these far-away producers are also building sustainable businesses to benefit their communities and countries. They thrive just like our local farmers do when we pay them a premium price at markets or via CSAs.
Wondering where to get the fairest coffee and chocolate of them all?
Sip and snack without worry at Green Sage Café and French Broad Chocolates. Both eateries refuse to stop at standard fair trade certification when it comes to sourcing.
Last year, Green Sage co-owner Randy Talley began implementing a new fair trade-like model called “farmer direct.” It yields farmers the highest potential profit by giving them the lion’s share of the sale.
Talley explains: “Thrive Farmers, a company based in Monteverde, Costa Rica, and Atlanta, sources organic coffee for Green Sage from farmers willing to consign their beans to the end user, us.” The company acts as a marketing agent to get the farmer a better return than standard fair trade. And that’s not just good for the farmer. “It gives us a direct connection with growers in other countries. It’s a little like knowing the farmer that grows the produce you buy at the tailgate.”
Dan Rattigan, co-owner of French Broad Chocolates, also prefers a direct relationship over a simple seal. “My opinion of fair trade certification leaves a lot to be desired,” he says. “It’s like a minimum wage: Who would want to earn such a measly price? It’s better than making less than the fair trade floor, but we’d rather have personal connections with the organizations and ensure with our own research that the farmers and producers be paid fairly.” In fact, Dan and wife Jael own a cacao farm in Costa Rica. They visit often, and eventually its cacao will wind up in their chocolate and on our plates. They’ve also visited their farm partners in Peru and Nicaragua to learn about and see the operations firsthand—Talley notes that he plans to meet Green Sage’s growers soon.
“We can sleep soundly at night knowing that, in as much as we have the power, we’re doing right by our suppliers, our staff, and our customers,” says Rattigan. Everyone can feel good about the business we do. That’s the goal.”
It’s Talley’s end goal, too. “Sustainable practices are what we strive for: Practices that are good for people and the planet.”
Visit Green Sage’s website greensagecafe.com to learn more about their green mission. And head online to read about French Broad’s farm and cacao partners frenchbroadchocolates.com.