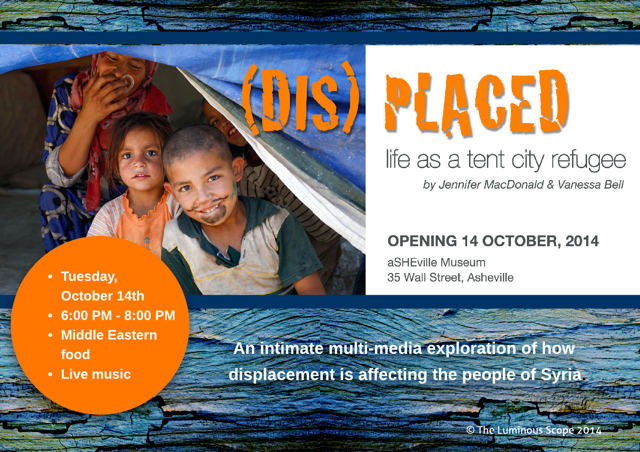 The new aSHEville Museum, at 35 Wall Street in downtown Asheville, is hosting the (DIS)PLACED - Life As A Tent City Refugee exhibit which opens tonight, Tuesday, October 14, 2014, from 6:00pm - 8:00pm and will remain through the end of the year.
The multi-media exhibit aims to shine some light on one of the worst humanitarian disasters in the last 20 years – the Syrian refugee crisis. The displacement of nearly half of the population of the country has had, and will continue to have, far-reaching global effects. The (DIS)PLACED exhibit is designed to inform the public of the complexity of this issue and offer some practical ways in which individuals can help.
Who's behind the exhibit?
Jennifer MacDonald is a multi-award winning producer/writer (Special Jury Prize at Sundance - www.anywhereusathemovie.com) with years of experience in many aspects of film making, and whose special area of interest lies in North Africa and the Middle East. A former cryptologist, world traveller and polyglot (English, Spanish, Portuguese, Arabic and some French), she currently teaches and lectures about the culture and history of the Middle East and has started the first basic Arabic program for High School students in the American South with an emphasis on cross cultural connection and discovery.
“Having traveled to this region many times over the years, I’ve seen firsthand the devastation and destruction of this rich culture and its citizens, as well as how much hope and joy a small amount of compassion can bring to these communities” says Jennifer. “I wanted to shine a light on one small area of this crisis, in one camp, to help people empathize and hopefully
activate some support.”

Vanessa Bell is co-curator and designer of the exhibit. With an experienced and discerning eye for all things creative, she was instrumental in conceiving and compiling the visual story for (DIS)PLACED. Outside of this particular collaboration, Vanessa is a skilled marketer, graphic designer, and artist in her own right, with photography and mixed media art on display in several galleries in Asheville.
Vanessa adds, “Individually, it’s hard to believe that we can effect much change in the world but I am a great believer in the power of positive thought and prayer, and sometimes all it takes a small reminder, a moment of empathy, understanding, or support.”
What's the aSHEville Museum?
The museum seeks to educate, inspire, and empower present and future generations by sharing engaging stories, facts, narratives, and visual imagery of the richly varied achievements and experiences of women and girls throughout the world. For more information, visit the museum's website.