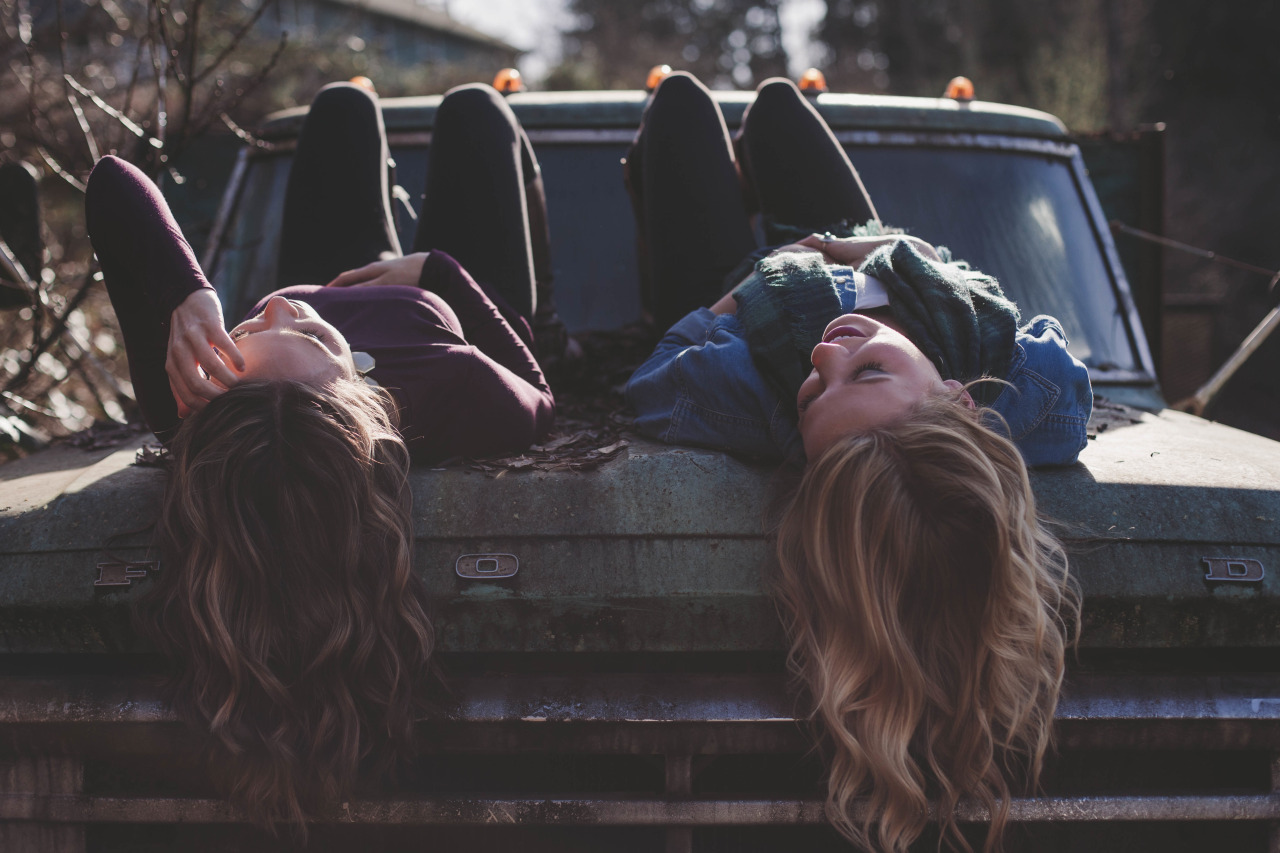 I still remember the moment she became my best friend. Six years old in the church bathroom. The skin on my face was like tracing paper then: translucent like water, and pale enough to reveal a large blue vein that dipped down between my eyebrows onto the bridge of my nose. All the girls in the bathroom were laughing at me, telling me I was ugly. I stared at my freckled onion skin in the fluorescent light. I used to think I was pretty. Now, all I could see was the blue vein. I was nearly in tears.

And that was it. From that moment on, we were inseparable. We did everything together. She taught me to knit, I taught her to crochet. We took after-school painting classes together, swam at the Y, and joined the same Indian Princess tribe. We told each other everything, calling after 9 p.m. for free minutes on weeknights. On the nights we couldn’t call, we bought a cheap spiral notebook and turned it into a shared diary. We swapped on Sundays, filling the pages with poetry and long, confessional letters, clippings from fashion magazines, and scribbled summer bucket lists and details of our crushes.

Weekends meant sleepovers. Usually at her house, a one-story cottage with a yard that backed up to a green, sprawling field. A narrow stream wound nonsensically through the grass; summer nights, we laid half unseen in the flowers until twilight fell across our shoulders, mapping constellations and talking about dreams, feet carelessly tossed half in, half out of the water.

“I read in a magazine that the length of your index finger compared to your ring finger means something,” she said one night, chewing a piece of grass thoughtfully. The fireflies were already out.

“Means what?” I asked, catching one between my hands.

“Something about love,” she said.

She took my hand gingerly in hers. The fingernails on both our hands were still wet with the same red Essie nail polish. After a moment of intent analysis, she announced, “Your ring finger is longer than your index finger. You fall in love like, super quick.”

Sometimes, we played the buttercup game. You hold up buttercups beneath each other’s chins and check the reflection’s color. If the buttercup reflects pale yellow, it means that you are in love. My chin was always yellow.

I had never been in love, though I wanted to be desperately. I didn’t know what it was supposed to feel like. I worried that when love finally arrived, I wouldn’t realize it until it was too late. I had a pillow printed with a picture of Snow White, and once, I remember delicately placing my sunburnt, bitten lips onto her soft cotton ones. It was important to practice, I thought. For when I finally meet someone.

She had The American Girl Body Book, a book about puberty published by the same people who made American Girl Dolls. It was one of the most coveted books in fifth grade, and for good reason: the pages were crammed with salacious details of girlhood, that hazy liminal space crammed with nail polish, day dreams, and training bras. We read the book together every chance we got, half-thrilled, half-horrified by how it allowed us to see into our future. Chapter four boasted a detailed diagram to illustrate the four phases of breast development.

“I think I’m at stage three,” she said one night in the bathroom. I was taking a bubble bath while she combed her hair. She pulled up her shirt and stared at herself critically in the mirror.

“I think I’m at stage two,” I replied dolefully, looking down. My chest was depressingly flat. I didn’t necessarily want to have to start wearing a real bra, but I resented the universe for refusing to even give me the option in the first place.

“No, you’re at stage three, too!” she chirped encouragingly.

She had these bowls I was obsessed with. Wooden, made of interlocking squares like a patchwork quilt. I’d never seen anything like them. All we had at my house were plain ceramic dishes, and it was the perfect symbol of how fascinating everything felt in her presence. It wouldn’t occur to me until years later that those bowls were not in fact fashionable, just old—leftovers from the seventies, and symbolic of nothing more than domestic laissez-faire decorating, a willingness to continue on into the future eating new food from old bowls.

When I was fourteen, we went to different high schools. Neither of us had cell phones. I lost my faith in God at sixteen and sat glassy-eyed through church services. I listened to Rilo Kiley and Something Corporate, angry shit, and read her posts on Facebook about glorifying God and mission trips to Mexico. I could still recite her home phone number by heart.

When we were seventeen, I met a boy in a band and she fell in love with a girl she met at the ice rink. She only talked about it after it had already ended—describing something that felt like a fever pitch, a vital pulse at the center of it all. We were in the empty park in my neighborhood at sunset, spinning around on the carousel we had long outgrown.  I never kissed the boy in the band, but I held his hand once when he drove me home in his mother’s Honda van.

Eventually, I lost touch. With the boy, and with her. I moved five hours away from home, and fell in love again and again. Quickly, always, like the magazine predicted. I fell in love with people and their infinite small kindnesses. I fell in love with houses, the way the light trickles across the kitchen floorboards at a certain time of morning. I fell in love with my friends; with boys with blue eyes, the way their hands moved as they made pour-over coffee the next morning. Last week, I moved for the fourth time in a year, and the next morning when I woke up, in a cream-colored house filled with sunlight and cardboard boxes, I felt myself falling all over again. Emotions exhaust me, but I feel fortunate for my own capacity for love, how often I feel it flowing like water and light through everything around me.

We need new bowls. I drove to the thrift store to look for cheap ones, and on the rack above the wine glasses, I saw a set of wooden bowls, outdated leftovers from the seventies, and I thought of her, twirling buttercups, scrambling eggs in the kitchen on tip toes Saturday morning. I wondered if she ever went to college and got her music degree, if she still goes ice skating, if she is happy being married to the man I saw her with on Facebook. A few years ago, I sent her a message about how excited I was to watch her walk down the aisle. After all these years. She sent back the confetti emoji, then added, It’s a really small wedding, just for family and close friends. I’m sorry!!!

I didn’t buy the bowls. But I could still recite her home phone number by heart.