Brewing Up A Storm with Katie Smith

Brewing Up A Storm with Katie Smith 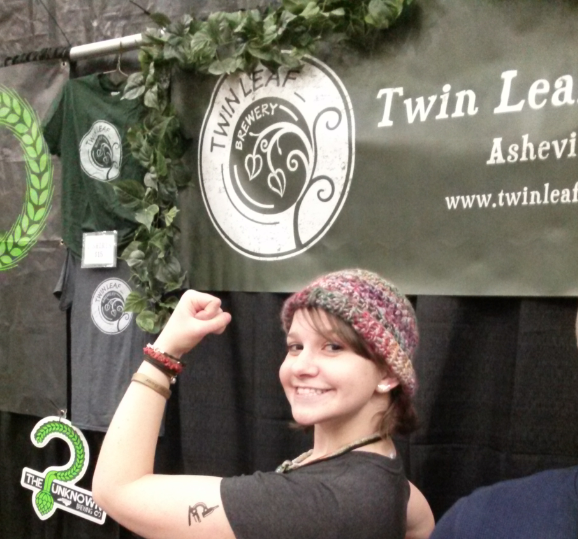 For Katie Smith, brewing is a family tradition.

Her uncles, brother, and father are all beer enthusiasts. As long as she can remember, there have been kegorators and homebrew kits as part of the family landscape. But Katie didn’t immediately go into brewing. She explored several career options before she found what fit. A dancer since childhood, she seriously considered pursuing the stage prior to enrolling in nursing school. Soon after, AB Tech and Blue Ridge both announced brewing programs. There was no question that she had found her calling.

Her fondness of craft beer, especially Vienna Lager, suddenly became a career path. She was already bartending at Twin Leaf Brewing in Asheville’s South Slope, so transitioning into the brewhouse was inevitable. After only a few classes at Blue Ridge, Katie was ready to roll her sleeves up and start brewing, making her one of the youngest brewers in Asheville at only twenty-three. “I had to choose between the classroom and gaining experience. I went for the experience,” she said.

Smith credits Highland Brewing and Leah Wong Ashburn as sources of inspiration. She says growing up in Asheville and watching Highland’s growth over the years has given her a sense of pride in the brewing industry. Highland’s success has paved the way for a lot of breweries to get where they are today, and for more people to go into the field. In fact, it’s a cycle that is repeated throughout the brewing scene in Asheville. “Katie’s natural positive energy is a great example of what draws more good people to craft brewing,” says Leah Wong Ashburn, President of Highland Brewing.

I asked Katie if she had experienced any disadvantages as a woman in the beer industry. “Some,” she said, “but I think it has more to do with me being so young, rather than just being female.” She went on to say that she certainly feels like she’s under a microscope, and that there seems to be more pressure on her to perform than her older counterparts. “On the other hand, I have had the opportunity to meet a lot of great people,” because of her unique position. “I get a lot of support, and there is a lot of enthusiasm for what I’m doing.” Which begs the question, what is Katie doing next?

This spring she released her Hibiscus Wit, the first in a series of flower inspired beers. She’s doing a lot of research as well as consulting with Todd Boera from Fonta Flora and Tim Gormley from Burial Beer to create a line of beers she can truly call her own.