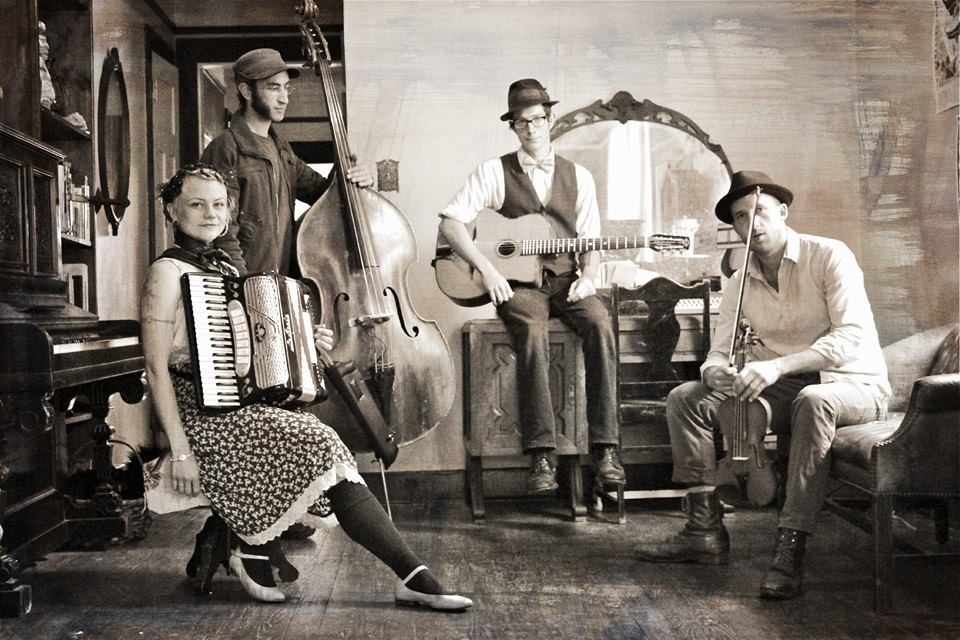 Beer City Festival is happening next Saturday, May 28th. It's a full day of delicious beer tastings, but you might not know that it also features acts from renowned local and international artists. Headliner Big Chief Juan Pardo & the Golden Comanche Indians is surrounded by talent with a stellar lineup that includes local band The Resonant Rogues, a duo whose distinctive sound pulls from world folk music traditions, jazz, and so much more.

The Rogues just released Here & Gone Again, a Kickstarted album that they recorded at Asheville's own Echo Mountain Studios, and they are known for funky, high energy shows that get people moving. At the heart of the project are partners Sparrow and Keith Smith. They are both vital to the Rogues' distinctive sound. Along with upright bassist Craig Sandberg and Drayton Aldridge on fiddle, they play and tour extensively. After Beer City, they'll embark on a Rust Belt tour from Indiana to Massachusetts.

I spoke with Sparrow about the Festival, their music (and the rich traditions they're engaging with), and how not dancing is basically impossible when you're at their show.

Asheville Grit (AG): Can you talk about the tradition you’re pulling from a little? How do you update it?

Sparrow: We really like folk music, pretty much from all over the place. We don’t necessarily play folk music from everywhere, but we really like how it sounds and feels from everywhere. We’re pulling specifically from Eastern European and Balkan music--the music of the Romany people and everywhere they went. We try not to use the word "gypsy," because in Europe it’s an ethnic slur, so people prefer not to be called that. This group came all the way from India through Middle East, all across Europe and the Balkans, and their music combined with the local music everywhere and made it extra special.

We also pull from American folk traditions--everything from old-time Southern Appalachian music, which is a mixture of Celtic, African, and all kinds of things—itself already blended—but we also really like those traditions, as well as old blues and old American jazz. 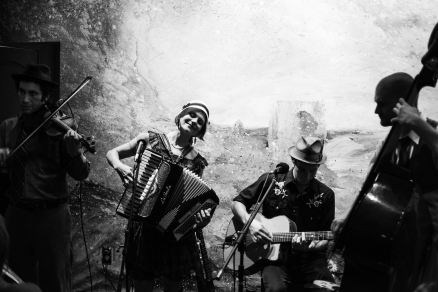 The way that we approach jazz is from more of a folk than an academic tradition. Though we do study jazz, it’s like instead of playing a specific part we’ll go off the melody and chord charts, we'll have a chord structure and then improvise. We’re focused on writing songs influenced by all of this music coming into our ears, which comes out of our brains rearranged. In each of our songs there’s definitely a main influence. A lot will come from what we're learning: if one of us learns a song in a traditional style we’ll end up writing a song along those lines, but all songs are influenced in a way by everything we listen to.

AG: How did you get involved playing this kind of music?

Sparrow: When I started playing the accordion I got really interested in klezmer music, traditional Jewish music. I started with the sounds and feeling of that style and got really into Balkan music. I lived in Asheville when I started playing the accordion but I moved to the Bay Area after a couple years and learned a ton there. There are a lot of people who study or are from the Balkans in the Bay Area. A lot of people immigrated there, both before and then during the 90's and the split of Yugoslavia during the wars. A lot of people left that area and many that could come to the States did and settled there.

A lot of the jazz stuff comes from New Orleans. I lived there for a little while years ago , and my partner Keith--the co-leader and other main songwriter of Resonant Rogues--lived in New Orleans every winter for the last four years before I met him. We spent our first winter as a band down there playing music on the street and learning a ton.

And also gypsy jazz, like Django Reinhardt. He was a bridge between those two worlds of Romany music and jazz, and he created his own style. We’re not a gypsy jazz band but it’s an influence. People have a tendency to categorize things to try to describe them, but it’s kind of impossible to do with us because we have a lot of things going on. 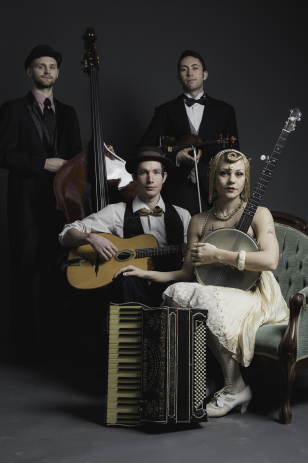 AG: What can people expect from the performance?

Sparrow: It will definitely be a high energy, fun performance but we really like to tell the stories behind our songs as well. It might not happen as much at Beer City, but at lot of times at our live shows you can catch glimpses of what the songs are about and the stories behind them because they’re all about important things—whether they're personal or about the world.

You can expect a lot of hot fiddlin’ from Drayton Aldridge. He's from Boone and you can see the North Carolina in his fiddle playing. We really love that—he’s got the classical and jazz chops and he’s a great technical player, but he has the folk feeling crucial to our music. All of the band is so much fun to play with.

AG: What do you love most about playing live?

Sparrow: I think I love to get people dancing. I’m a dancer and a dance teacher and so dancing is one of my big passions in life. A lot of the music we play is listening music in this way that the words have meaning and we try to play really beautiful songs, but at the same time it's all dance music--all the styles we play, everything from Balkan line dancing, belly dancing, swing dancing, or contra-style dancing with the more Appalachian-inspired tunes.

A lot of our following here in town are dancers and we really love that. Folks from our dance communities and people from other dance communities can come out and dance to every single song, and we highly encourage that. I also love to teach super basic stuff at the shows. You can come and dance, and you don’t have to learn a million kinds of fancy footwork!

AG: What was the experience of making your album?

Sparrow: It was the first full-length studio album that we’ve made. We’ve been a band for over two years and we decided to go big with it and record at Echo Mountain, which is one of the best studios in the Southeast and in the country. The folks at Echo Mountain were incredibly helpful and kind and really made it happen for us.

The Kickstarter also allowed it to happen. I really encourage people to support Kickstarter and Indiegogo campaigns for DIY bands. We did everything on the album, including the producing and arranging. I did all the graphic design, marketing, etc.

We are about to record again, and we’re going back to Echo Mountain because we liked it so much. So this fall we’ll be recording another full-length album with all new original songs funded by a Kickstarter campaign, and we'll release it next spring.

AG: What are your plans for touring?

Sparrow: We're touring this summer. This year we’re staying a lot closer to home. We’re home more this year, and we’ll be gone most of next year doing the album release. But this year, the year in between, is kind of the input year. You can’t just keep going and going and going. I can’t write songs unless I sit down for a minute. 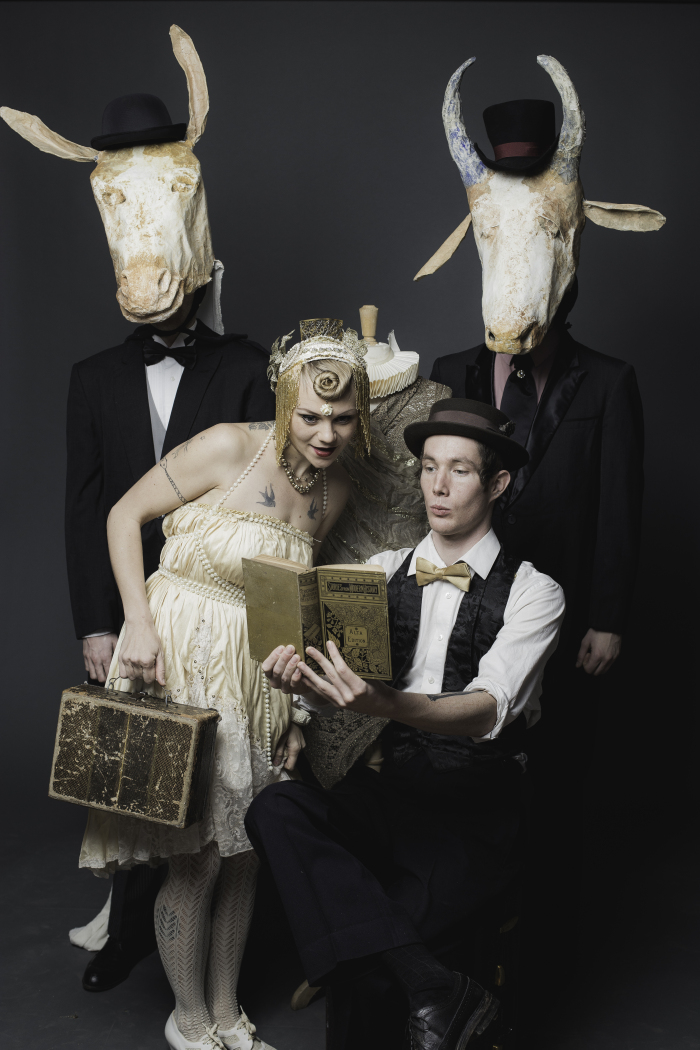 Catch The Resonant Rogues, along with other fantastic musical acts, at Beer City Festival, this coming Saturday from 12-6 pm! Got your tickets?