From Beer Belly to Six Pack

From Beer Belly to Six Pack 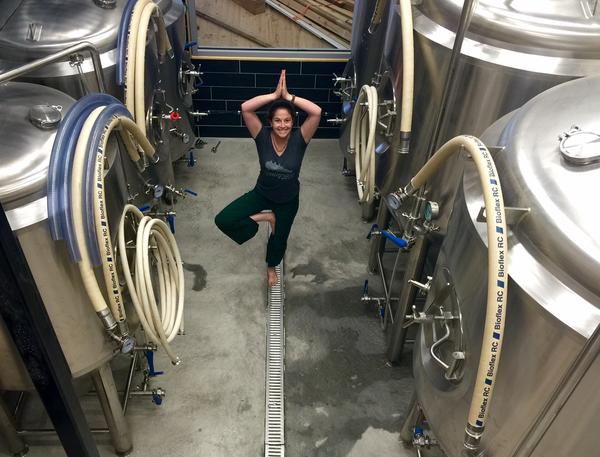 Jordan Boinest of Newgrass Brewery and Bottoms Up Yoga

Have you seen that meme floating around the web?  The one that says “Abs are cool, but have you tried craft beer?” Let it be known that you don’t always have to choose between maintaining your girlish figure and indulging at your favorite brewery!

Fortunately, WNC has an amazing selection of athletic activities to balance out our equally mesmerizing beer options. Sometimes, they even join forces! There’s nothing like pushing your physical limits and rewarding yourself with a pint to remind you that even exercise in moderation can be a lovely thing.

“You can’t live in Asheville and not love visiting the local breweries and enjoying the outdoors,” says Leslie Grotenhuis, owner of Kick It Event Management. She and her team organize a number of sporting events around the WNC area, and many of them are centered around and/or sponsored by the local breweries. Their Race to the Taps series of foot races has started hot out of the gate in its inaugural year!  With half of the Six Pack of runs already complete (three more are still to come this fall) there is no doubt that an active lifestyle with a side of Let Loose is a winning combination!

Nikki Mitchell with Race to the Taps reports that the runners of these races have been a diverse crowd in terms of gender, age, fitness levels, and location.

“We had 500 runners for the Highland race, and 450 for Pisgah. There were walkers, 5k-ers, track clubs, men, women, young and old. What surprised us most were the ou-of-towners. People are coming to Asheville to participate in these races from all over the Eastern side of the country. We even had one couple from Texas participate as part of their vacation in Asheville.”

“You get to not only taste the wonderful craft brews from this region, you really get to see the neighborhoods and personalities of the breweries. Sierra Nevada’s setting is very different from Oskar Blues’ or the South Slope,” Grotenhuis says of the brewery-hosted events. “We wanted to highlight more of the breweries than we could with a single race. By making it an ongoing series, we are able to tie more of the breweries together and showcase the cohesive attitude of the brewers. We are also introducing new people to the breweries, drinking their beers, on their grounds. People who may not have visited on their own.”

If running is up your alley, check out The Asheville Running Experience (ARX)! They had put together six events for Labor Day weekend that definitely knocked the socks off the runners! A portion of each entry fee was donated to Eblen Charities as part of their Arby’s/Eblen Joyful Home for the Holidays program to provide food to area children over the holiday vacation. Event participants were also able to make additional donations through the registration process.

These events included the ARX Half Marathon that started and finished on the South Slope on the morning of September 5th. Asheville Pizza and Brewing Company’s (ABC) brainchild, The Superhero 5k, took place that evening with a redesigned course to show off Asheville’s South Slope and River Arts District. Runners/Walkers are always invited to dress as their favorite superhero for a super human display of awesomeness!

“We are known for our inclination toward pop culture and comic books,” says Mike Rangel, owner of ABC, “One of the things I love most about owning a business in Asheville is that the kookier the event, the more people turn out for it.”

Also a great was the Incredible Urban Odyssey, a team scavenger hunt that shows off what’s unique and special in Asheville which took place on Sunday. Teams began at The Millroom, got their clues via social media, solved the mystery, and headed to the location indicated. Once they arrived, they had to perform a task before receiving their next clue. Defeintniely all worth checking out for next year and for what else they might have coming up.

There is still time to register for the 2 upcoming Race for the Taps events, both in October. Check out more info below.

The Highland Race to the Taps

Also, ABC will be hosting Ping-Pong on Monday nights through the fall. There is no registration required. Two wins in a row means automatic retirement, so new folks shouldn’t have to wait too long for a table. “It’s also a great spectator sport,” says Mike Rangel of ABC.

Catawba Brewing is sponsoring the Thomas Wolfe 8k this year, which means free beer for runners 21+ after they complete the run! This is Asheville’s oldest running event now in its 39th year. The run celebrates Asheville’s native son by starting at the Thomas Wolfe Home and Museum, continues through the Historic Montford neighborhood to Riverside Cemetary, the final resting place of the famous author. This race is a fundraiser for the Thomas Wolfe House, Asheville Track Club, Read to Succeed, and the Asheville Literacy Council.

Not really into running? There’s a lot more than running events to choose from! Twinleaf Brewery is hosting Foos-N-Brews Human Foosball! Teams of six battle each other in a tournament style fight to finish. There are tons of prizes for the winning teams, and lots of fun for the players and spectators. Teams strap themselves into a giant inflatable foosball table complete with goals and crossbars. There are even referees on hand to make sure no one uses their hands. Jordan Boinest of Newgrass Brewing (pictured in top photo and below) in Shelby plans to host “Bottoms Up Yoga” as a regular event at their tasting room.

“Bottoms Up Yoga is joining together at the brewery for an hour of yoga followed by your brew of choice. I think most breweries pull in outside instructors, but since I am a certified yoga instructor I teach the classes myself. It really does make for a unique experience because I can not only lead students through yoga class, but also through their tasting experience afterward,” says Boinest. “This class helps create a laid back community of friends, usually with very similar interests as well. For my class there is no fee, it is donation based only."