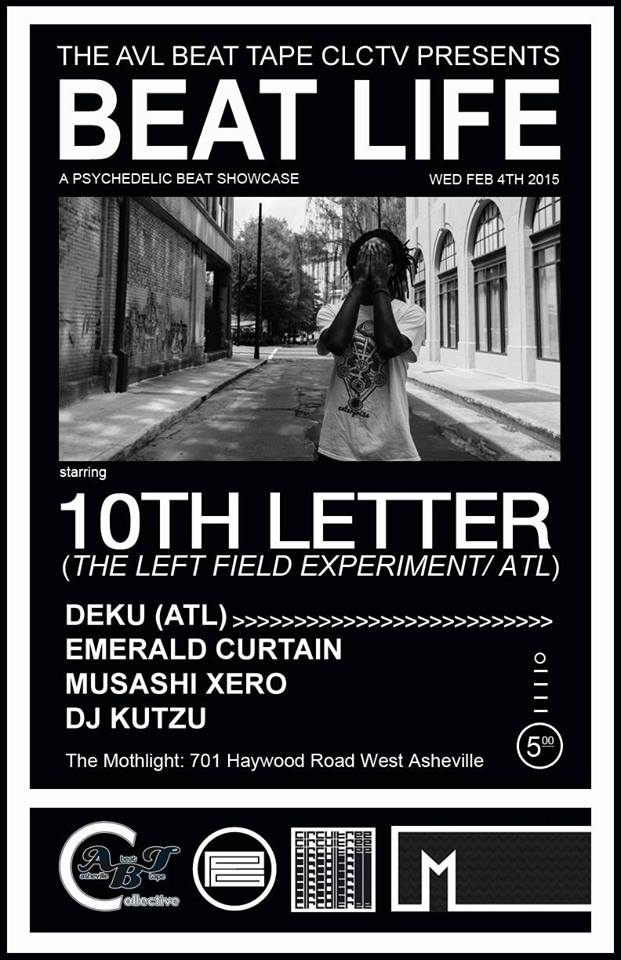 On Wednesday, February 4th, Atlanta-based electronic artist 10th Letter will take the stage at The Mothlight (701 Haywood Rd). The show, which also features performances by Deku, Emerald Curtain, Musashi Xero, and DJ Kutzu, is one of the first of a series of shows put on by the Asheville Beat Tape Collective, a group of local electronic artists, musicians, and DJs who are making an effort to expand Asheville’s electronic music horizons by featuring local talent alongside regional and national acts.

10th Letter most recently played in Asheville during the Aligning Minds residency at Asheville Music Hall (Waveforms). His most recent album, Corpus Animus (2014), reflects his creativity and willingness to experiment and blend sounds to create a rich variety of moods and experiences. The album feels like a journey through astral realms, but with enough groove to keep you thoroughly embodied. Songs like “Dragon Float” start out with earthier elements of African-style drumming, but incorporate transcendent, even spacey notes that float above the beats, as well as a chorus of children who seem to be celebrating the music itself.

10th Letter excels in tying elements that at first seem disparate into unified wholes, creating perfectly organic combinations that sound totally new. He’s also heavily influenced by a wide variety of philosophies, discourses, and aesthetics, including Surrealism, Afro-futurism, mysticism, and psychedelia. Also hailing from Atlanta, Deku makes irreverent beats using traditional and experimental techniques that include instrumentation and samples that pull from a wide variety of sources, including noise pollution and found sounds. His most recent album, Escapism (2014), is an ode to “all the … planes we escape to,” including video games, spirituality, nature, and the realm of dreams. Songs like “Perelandra” (an allusion to the second novel of C.S. Lewis’s Space Trilogy) invite submersion in the sonic realms they create, which may be on other worlds or just behind our closed eyes. “1987” features glitch beats and static sounds that move into lilting harmonies that rise over thudding bass.

The Emerald Curtain is the combined force of Asheville producers Samuel Paradise and EmE. Together the duo creates experessive, psychedelic beats that are both uplifting and chill. Emerald Curtain sets are opportunities to let the music float outside and within you. This is evidenced by their new song, “Everything in Color,” (https://soundcloud.com/the-emerald-curtain/everything-in-color) which weaves a tapestry of sound that is enveloping and breaks into shimmering, fluttering pieces. Emerald Curtain’s synesthetic sounds fit with the duo’s interest in psychedelia. “Everything in Color” includes a sample of a 1950’s housewife who, after being administered a dose of LSD as part of an official study, comments on the air itself, which is “like a curtain, or a spiderweb.” Check out the original videao clip:

Part of the Emerald Curtain’s musical agenda is to lift the veil over quotidian reality, showing us the networked layers that lie just outside of our perception. Musashi Xero is another local force who I’ve talked about a lot here on Grit. The only hip-hop artist on the schedule, Xero will bring his distinctive, poetic style to the stage to perform songs from his newest EP, Underground Kill Wave, as well as new songs, which might include his collaborative work with Panther God from their to-be-released project, Xero God. Musashi himself describes his style on Xero God as like “a cool, futuristic lounge singer, but instead of martinis, people are smoking joints. It’s a very laid-back atmosphere, maybe on a space station.” Well, I’m sold.

Also on the schedule is DJ Kutzu of the Vinyl Time Travelers. Check out a VTT practice session:

Kutzu’s brand of turntablism is classic but innovative, a funky blend of tradition and experimentation that is consistently danceable and fresh. Kutzu also gets creative on the tables, sometimes scratching with chopsticks.

Get your music on for a mere $5. Visit The Mothlight's website for more details.