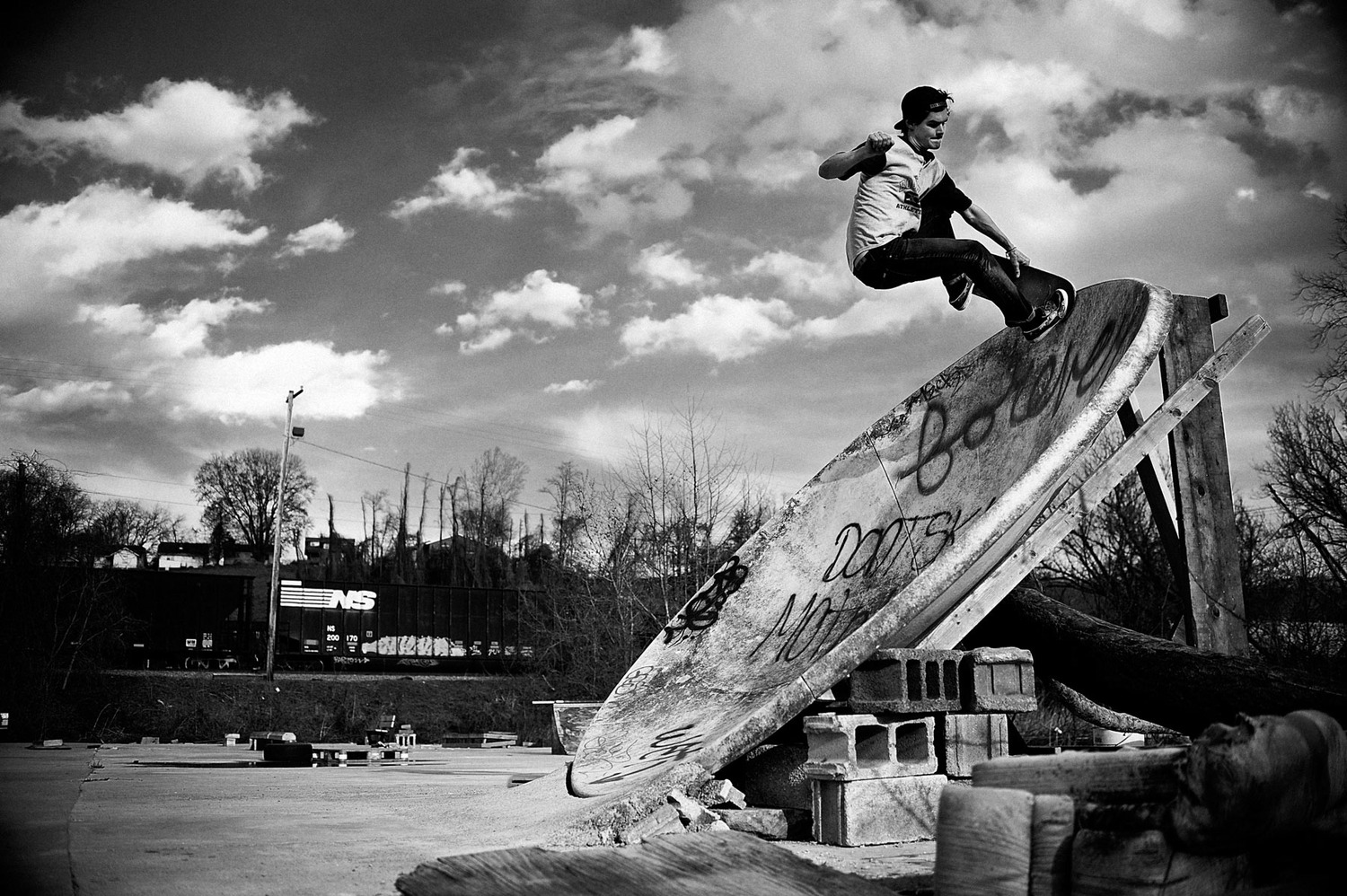 Nestled behind warehouses and abandoned structures, an old building foundation has provided a home-base for street skateboarders in Asheville for the past eight years. Since the heated debate over city skating downtown in 2012 where skaters came out of the woodwork to legalize their mode of transportation, you don’t hear much on the subject in local debate. You don’t see many four-wheelers cruising our sidewalks either. Aside from the Food Lion skate park downtown, River Arts District’s The Foundation Spot is one of the few places skateboarders can come together and free-skate street style. 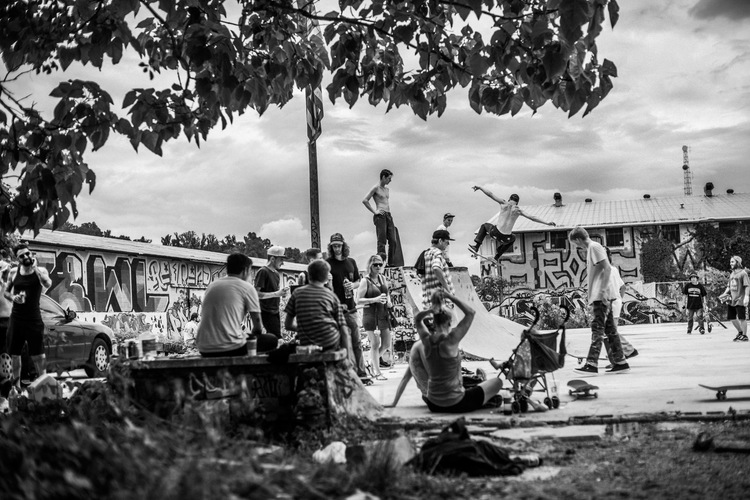 Rob Sebrell, Owner of PUSH Skate Shop, was part of that city-wide debate to legalize skating in downtown Asheville and has played an instrumental role in rallying the troops to develop RAD’s skate-space, The Foundation. With the help of Arts2People, they’re inviting the public out this Saturday, May 21st to check it out, grab a cold beer and listen to live music as part of their fundraiser, which they’ve aptly re-dubbed their Hellraiser. “I think The Foundation Spot is one of the few spaces left in this town for public creativity. It exists through the collective efforts of so many amazing skateboarders, artists and this awesome eclectic community of people,” says Sebrell. “It brings so many people to this town and creates a home for so many that live here. It’s the epicenter of our skate culture and I think that’s a very valuable thing.” 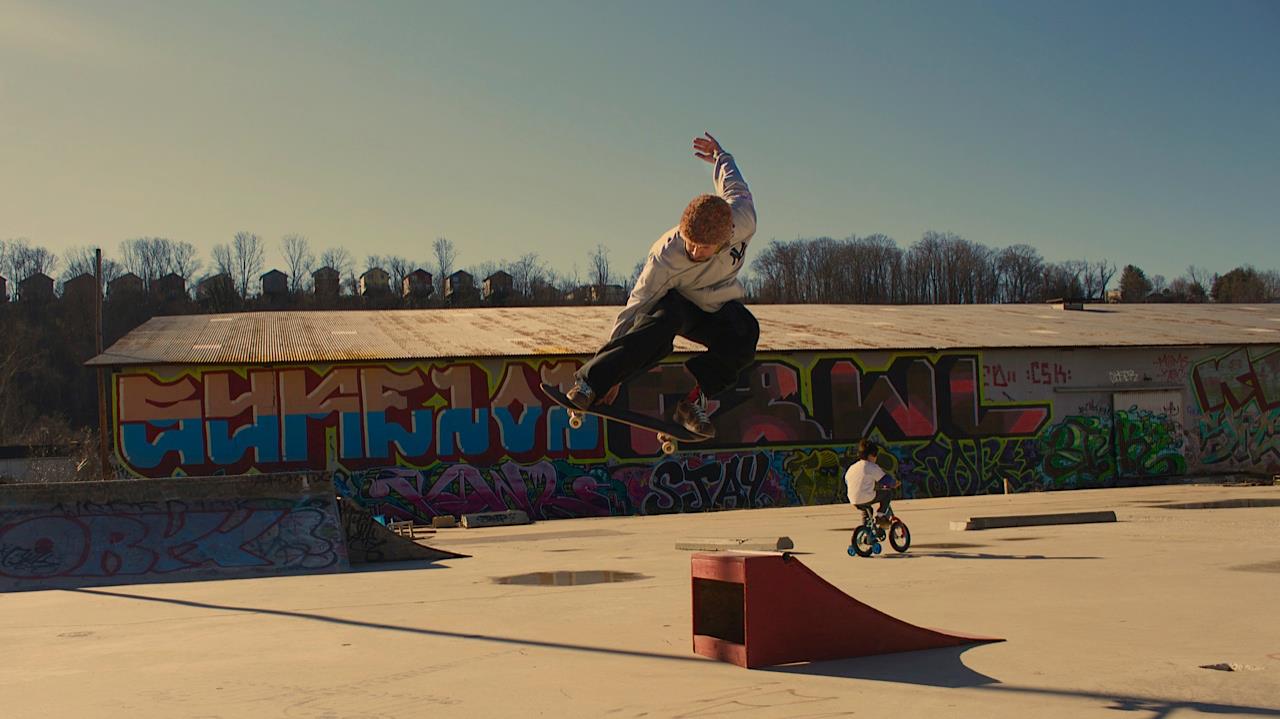 The property’s original owner was the father of a kid that skated and practiced graffiti art and gave permission to Sebrell and a few friends to use the space as long as they took care of it. What started with a filing cabinet over-turned on a concrete slab to run tricks on quickly grew into a landscape of found objects and scrap metal contributions from the growing skate community. This past summer it was sold to three investors and Sebrell says he knew that was the end of their already gratuitous run in that space. "For those who don't know, foundation spots (making a skate spot on an abandoned building foundation) pop up all over, they are pretty common, what's almost unheard of is them lasting for like seven years and ending up getting full permission to use the property,” says local photographer and skater Mike Belleme. Belleme actually covered the dedicated hellraising that has gone into the space from its collective skateboarding tribe thus far in Canadian publication Collective Quarterly.

The new investors didn’t kick the skaters to the curb however, instead they told them they could stay with the caveat that they get their own insurance policy. So, as they’ve done over the years fundraising concrete pours for ramps and other skate-able structures via art shows and video premiers at the skate shop, they’re hosting this weekend’s Hellraiser to help them continue into their next phase. “Arts2People are essentially our fiscal parents so we’re able to sign leases and obtain insurance through them,” says Sebrell. "Kitty Love has been amazing through all of this. Eventually maybe they (A2P) will help us start our own nonprofit but for now they’ve really given so much of their time, resources and knowledge to help make this all happen.” 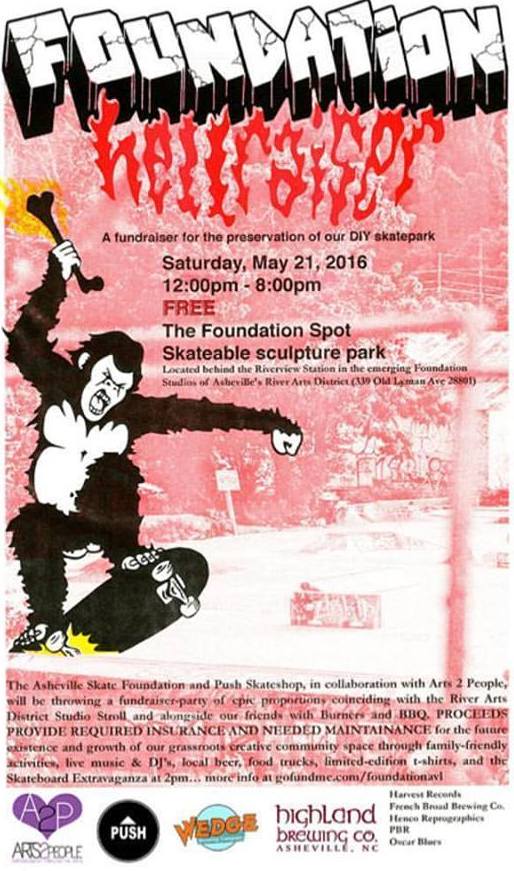 This Saturday’s FREE event happens alongside the third annual Burners & BBQ event where over 40 artists will be painting Asheville’s largest mural to date on a warehouse off Lyman Street. Gus Cutty talks about his involvement in that graffiti arts event with iamavl during his last art show at the Satellite Gallery. The River Arts District spring Studio Stroll will also be in action May 21-22. The Foundation Spot will have t-shirts for sale at the event and ways to support and get involved.  Burners & BBQ also have a live GoFundMe for those that can’t make it but would like to support.