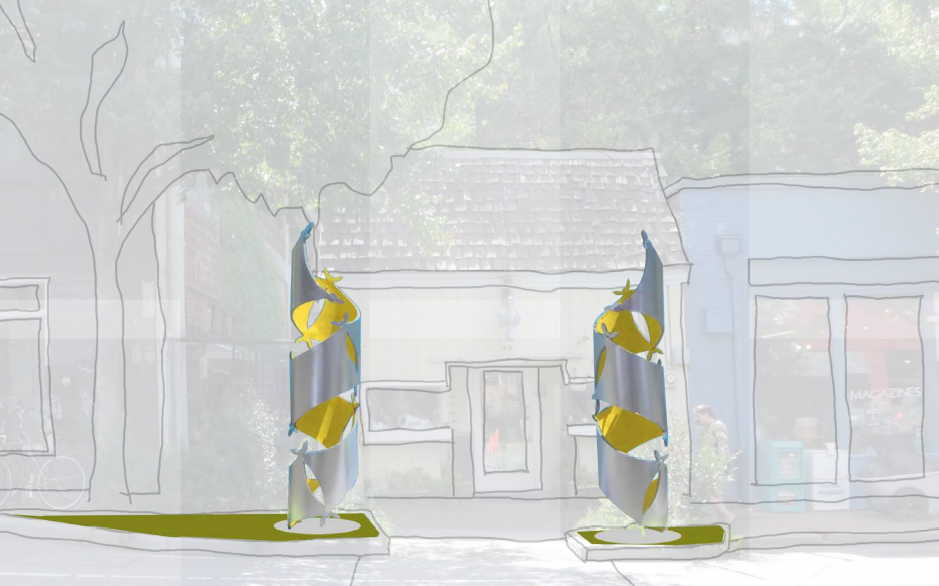 Locale is a limestone sculpture proposed by Todd Frahm and Lara Nguyen. It includes
a black bear, a great horned owl and a box turtle, all native species that symbolize the assortment of neighboring businesses, the artists say. Other elements include a growler, a fiddle and a stack of books.

Two stainless steel columnar pieces would stand sentinel along North Lexington Avenue to celebrate what binds us together as a community, artists Jeanine Centuori and Russell Rock of UrbanRock design say in their proposal called Tied Together. The proposal, represented in the photo, harkens back to the early 1980s when a group of concerned Asheville citizens tied together sheets and "wrapped" several blocks of downtown Asheville that were under consideration for demolition to make way for a new downtown mall.

Artist Beatrice Coron proposes this stainless steel column with laser-cut elements which "combine the aesthetics of the industrial past and the modern look of the future," the artist says. The 15-foot-tall column will be visible from a distance, while pedestrians can appreciate details at close range, the artist says.

-Visiting artist program: Commission Chairman Jay Miller said commission members and city officials are finishing up a request for qualifications to hire an artist for the city's Visiting Artist Program. The RFQ is scheduled to be released to the public on Feb. 9.

The plan is to find an artist who can start working on an art piece that would represent some aspect of the local African-American community, while also helping start a bigger effort to create an African-American Heritage Trail in the city of Asheville. It would be modeled after the city's popular Urban Trail of artistic markers and sculptures placed throughout downtown.

The commission has been working to create a selection committee heavily representative of the city's African-American community. To that end, the following residents have agreed to serve on the committee, according to Miller: Asheville City Councilwoman Sheneika Smith; Darin Waters, assistant professor of history and special assistant to the chancellor for community outreach and engagement at the University of North Carolina at Asheville; Brent Skidmore, associate professor of art and art history, director, craft =studies and co- founder of the STEAM Studio at RAMP Studios for UNC Asheville; Sasha Mitchell, chair woman of the African American Heritage Commission for Asheville and Buncombe County; Kimberlee Archie, equity and inclusion manager for the city of Asheville; and photographer and graphic designer Reggie Tidwell, who is also a member of the Lake Eden Arts Festival board.

-Asheville Urban Trail: Plans are in the works to restore two Asheville Urban Trail pieces that have been in storage. The first is stop #7, known as "Art Deco Masterpiece." The tile mosaic station marker featuring motifs from the S&W building pays homage to the beautiful building, which has new-found life with newly opened cafe, restaurant, bar and nightclub. The second is stop #10, known as "Grove's Vision." This etched glass piece honors the Grove Arcade and stands several feet tall and was removed during construction of the new Cambria Suites Hotel.

Dahl told the commission that there's work underway to "reboot" the Urban Trail committee by making sure there are seven active members of the committee that can work with the commission. That's especially important with the talk of a new African-American Heritage Trail, as well as another cultural trail featuring street performers in downtown Asheville, she said.

With all the talk of new public art trails, commission member Jay Fields suggested taking a broader planning approach "to what we want this to look like 10 years from now. I'd just love it to be goal-oriented, rather than reactive."

-68 Haywood Street: Dana Frankel, the city's downtown development specialist, asked the commission to sign off on a plan to allow the folks at Purl's Yarn Emporium to yarn bomb the fence at 68 Haywood during Go Local Week in February. (That's the ol' "pit of despair.") The commission agreed. Look for an explosion of yarn hearts there, she said.

-Watershed Arts piece: The city of Asheville is supporting a UNC Asheville Arts Fest workshop on April 5 with Betsy Damon, an artist that focuses on art that engages the public around water quality and other ecological issues, according to Steph Monson Dahl of the city's strategic redevelopment office. That workshop will kick off brainstorming for a permanent public art piece to be installed at 14 Riverside Dr. (That's the location of a refurbished building that's available for rent by community organizations and includes public bathrooms in the River Arts District.) The plan is to have the students help design a piece that will be under construction by spring. The final work will be paid for with a Duke Water Resources Grant, according to Dahl.

-Mystery public art installation: Near the end of the meeting, commission member Guillermo Rodriguez obliquely asked fellow commission member Andrew Fletcher how it was going with the Asheville Symphony. Fletcher obliquely answered that it was going well, and he would have more information soon. Asked after the meeting to clarify, Fletcher said plans are in the works for a three-week public art installation in March in downtown Asheville. The installation hasn't been finalized yet, Fletcher said, adding that he hoped it would be soon.