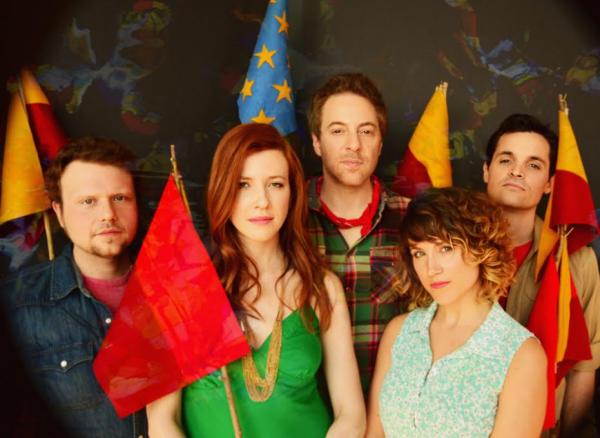 From the hipster lined streets of Williamsburg to the Fifth Avenue elite, an indie-folk Americana band has found it's voice in the city that never sleeps. Their alternative blend of classic yet modern sound is a refreshing listen and you can hear influences of Paul Simon throughout their new studio album. They call New York city home but are on the road touring all around the country supporting their latest album.

Lauryn Higgins: For readers completely new to your music, can you describe your style and tell us a little about the band?

Andrew Vladeck: Fireships started off hot-wiring old folky instruments in order to give them more juice to play clubs in downtown NYC. I soldered a humbucker pickup into my banjo. Nowadays we’ve pushed a little further mixing the old with the new, a contemporary band-fueled songster vibe with roots that draw from the well of Americana music. You’ll hear The Beatles, The Boss, Simon, Dylan, as well as more current versions of them, mixed together. The band is made of various music friends that all play with each other in the pretty incestuous music scene here.

Lauryn: You just released your first self-titled debut album. Congratulations! What was the process like, creating a completely new album with new people?

Andrew: Thank you! It was so liberating to start anew - with a more holistic vision for the sound and presentation - all the artistic aspects. Creating collaboratively with artists I admire, made everything a lot more fun and inspiring. Being able to disappear to a cabin for a while, and then immerse myself in great musical company was a pretty excellent method.

Lauryn: Along with a new album, you just released an amazing music video for the song, “Countdown Time,” where you played a drunken astronaut wondering around some of NYC’s most famous landmarks. What was the idea behind the video and how did that come about?

Andrew: Thanks, I’m glad you like it. That video was a blast to make and totally captured various things I contend with. We’ve got access to great resources here in NYC: people, places - if you don’t take advantage of them you’re wasting your time. I mean, this is what we pay absurd rent for, right – we rent the whole city! I wanted to show how I contend with my dreams and fantasies and come to terms with reality - and make the best time of it that I can. SO, we have a fun but thinly-veiled metaphor at work: boy wants to be astronaut; it’s really hard to get to be that astronaut; you can be depressed about it or you can adapt your plan and vision to get as close as you can, and have some effin' fun. When I was writing the video I came up with the various locations I wanted to go for, and we shot in a light, guerrilla fashion that enabled us to get a lot of great shots before being shooed away by security guards in various instances.

Lauryn: You guys are touring from NYC to Chicago. What made you want to bring your music to Asheville?

Andrew: I’ve played Asheville a number of times with other bands. It’s a city that has always appealed to me because of its proximity to the mountains and how immersed it is in the middle of a music culture that I adore. I’ve been an old-time banjo player since I was a kid, and play a lot of folk guitar styles - so Asheville is as close to the source of all that as we’re gonna get on this tour. The idea excites me.

Lauryn: Can you tell me what we can expect from your live show?

Andrew: This touring band is lean and mean and total crackerjacks - I can’t wait to get into the rhythm of nightly shows. I’m very excited for a bunch of the vocals we’re working up, and the possibilities to involve the audience in ways that will be really fun for us.

You can see the Fireships preform at The Bywater, May 17.