5 Questions with Dano Holcomb of Root Down Food Cart

5 Questions with Dano Holcomb of Root Down Food Cart 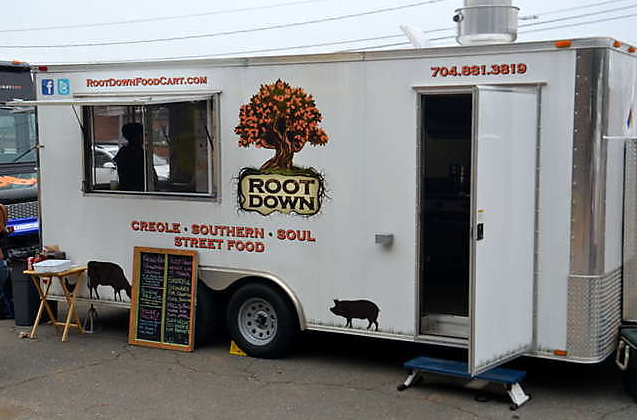 I got a lot of positive feedback re: my interview with Russ Keith from the Grey Eagle Taqueria (GET), so I'm glad people liked it!

Here's my next one, with Dano Holcomb, the chef & co-owner of a food truck called the Root Down Food Cart.   I caught up with Dano at the Wedge Brewery where he parks himself every Wednesday night.  I've tasted Dano's food, and it was all really really really good.  The boudin balls were some of the most delicious deep fried things I've had all year.  Dano is a super-nice guy, and happily agreed to this interview.  He also let me inside the truck!  Yeah, Man.

STU HELM: Dano, my Man-o! Thanks for agreeing to do this interview! First of all, please tell the people who you are, what kind of food you specialize in, what is your background, and what makes your cooking unique in this town full of great eating options.

DANO HOLCOMB:  Hi Stu.  Thanks for having me on the show.  Let's see.  My name is Dano Holcomb, Chef/ Co-Owner of Root Down food truck.  The other Co-owner is my wife Julie.  The kind of cuisine I enjoy making is a combo of Creole, Southern and Soul influenced food.  I am originally from Illinois and grew up in the Chicago area.  I learned how to get around in the kitchen from watching my dad and my grandfather cook (which was way before I ever wanted to make this happen professionally).  My grandfather (Mom's side) moved from Chicago to NC when I was young and we would take summer family trips to Tryon, NC to visit.  I think this is when I began to appreciate Southern food.  A few years later, my parents moved our family from IL to Tryon, NC as well.  I wound up going to undergrad at UNCA and played soccer there.  I stayed in soccer for many years and started coaching at the collegiate level.  However, the cooking food thing didn't grab hold of me initially.  It wasn't until I was 15 years into my coaching career that I decided to change and head to New Orleans for culinary school and  immerse myself into the incredible food culture down there.  After graduating, my wife and our two boys moved back to NC.  I worked briefly for Farm to Table pioneer Cassie Parsons at Harvest Moon Grille in Charlotte before starting Root Down (in Statesville).  We moved to Asheville in early 2014.  Asheville does have an abundance of talented chefs and great eateries.  As far as I am aware, we are one of very few places that heavily features New Orleans cuisine - especially Creole. 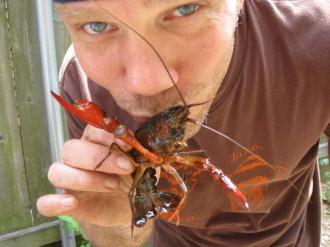 STU: I met you at Geraldine's Bakery on Merrimon, where you get your bread for sandwiches, and then I saw you again a few days later at the Blind Pig event, "The Pig Lebowski," where you were helping behind the scenes. There seems to be a great sense of camaraderie, rather than competition, among the various chefs, restauranteurs, and food industry folks in Asheville. Is that an accurate observation? Can you describe your experience in the local food scene?

DANO:  Firstly, Fred and his gang at Geraldine's are awesome and we get so many compliments on their bread.  Ok, back on course, I would agree with most of what you thought.  When that collaborative atmosphere is lucky enough to happen in a food town then the quality is allowed to flourish.  Much like NOLA, there are so many outstanding Chefs who are really showcasing their creative abilities in a relatively small town.  This makes you want to work harder and also appreciate your fellow neighbor's work.  It is humbling as well as gratifying.  This makes us all better.  As far as my experience so far?  Hmmm.  I still consider myself a bit of new comer.  I have been on the street here for 9 months and though I have enjoyed it,  I can become more visible in the community.  Many people have helped me make the transition to Asheville a comfortable one and I am very thankful for that.  Hopefully I can be as generous to others as they have been to me.

STU: I've been to other cities where the food trucks are a major part of the food scene and seem to be tucked into allies and empty lots everywhere you look, but I've noticed that in Asheville, the food trucks are either parked in the lot of a bar, or in a designated food truck lot. Can you explain some of the rules and regs you have to follow as a food truck?

DANO:  Yes, Stu, there are indeed certain rules for the food trucks and mobile food units in general.  For the most part, these rules are pretty understandable:  You may not park on just any street.  You have to have permission to park in a private lot.  You have to hold a permit for the places in which you do park.  You can't run a generator inside city limits because of noise.  We also are inspected by the Board of Health on a regular basis.  Some trucks require a commissary kitchen in which to prep (which is a 'home base' and a place to drain gray water, clean dishes, store food). 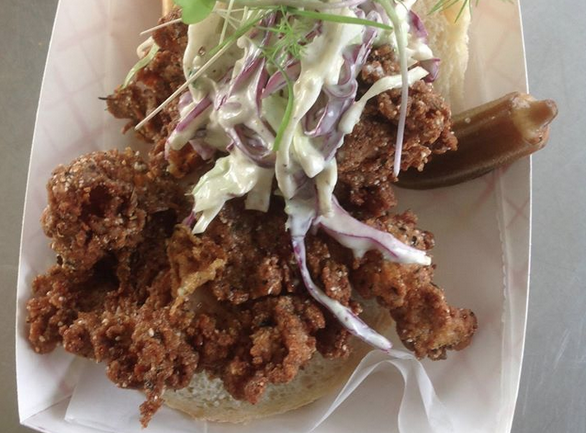 STU: How's business? I noticed another gentleman, Dave, in the truck cooking with you? Who is Dave? An employee? Co-owner? Do you and Dave both make a good living doing the food truck thing?

DANO:  Well I didn't really know what to expect.  Business is getting better.  I think there is still a mystique about food trucks and street food.  Some people are still a little unsure about accepting the truck scene as a number one go-to food option.  The food truck culture and fan base is growing slowly.  That is only my opinion and I am basing it on my experience in the Iredell County, Lake Norman and Charlotte areas, where we started out.  Yeah, Dave Hawbaker is great.  He is one of two main guys I have working with me.  He moved up from Charlotte to join forces.  Josh Daniel is my other guy.  He started out with me in Statesville and made the move to AVL in January.  These two are the nuts and bolts of Root Down.  Fantastic people and hard workers.  The Co-owner is my wife Julie.  She usually doesn't work on the truck but does a lot behind the scenes!  I have a couple other crew members who help out from time to time as well.  Rebecca Sullivan and Taylor Budd, if I may shout out.  Since the weather has cooled things off, the food truck business slows down significantly.  The work hours have dropped and will continue to drop until spring.  The spring and summer are obviously the busy times for us and when we all make the most financially.

STU: Finally, tell the people what your schedule is. Where are you to be found on what days and at what hours. Can your food be enjoyed at any other local venues? Do you work for any other restaurants? Basically, please tell the people where and when they can eat your wonderful cooking!

DANO:  You can catch us every Wednesday at Wedge Brewing in the River Arts District.  Check our website (www.rootdownfoodcart.com) for where we set up the rest of the week.  We also set up at Highland, Pisgah, GreenMan, Southern Appalachian Brewery, New Mountain AVL as well as other spots.  I don't currently work anwhere other than for Root Down. 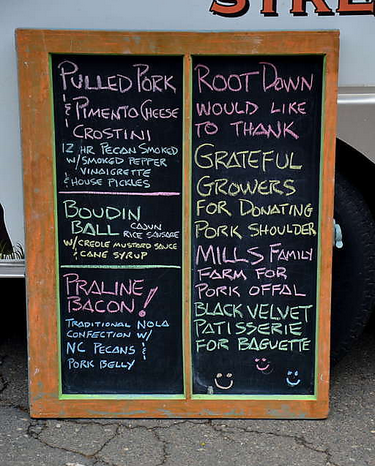 STU: Thanks, Dano... okay... one last thing... My all-time, number one, most favorite TV show ever, hands-down, bar-none is the classic police drama, Hawaii Five-O. Not the current POS remake, or the POS remake before that, but the original, 1968 - 1980 series, starring Jack Lord as Steve McGarrett, and James MacArthur as... you guessed it, Dano Williams, frequent recipient of one of the greatest lines in television history: "Book 'em, Dano: Murder one." The episode titled "Hookman" is a freakin' masterpiece of story telling. You gotta check it out. It's on YouTube. I guess I don't really have a question... except... have other people brought up Hawaii Five-O because of your name? Is it annoying? You even kinda look a little bit like James MacArthur. Never mind. I'm an idiot.

DANO: Stu, I was born in 1969.  I watched the show before but never religiously.  My mom was more into Barnaby Jones or the Rockford Files so I watched more of those episodes.  People do gimme that 'Book 'em' line fairly often.  I don't mind it at all.  I have been told that I look a little like J Mac.  Thanks for the compliment!

Aaand there you have it!  My major take-away from this interview is that Dano is a nice guy, who knows what he's doing, and gives a shit about his food, and food in general.  When I went to see him at The Wedge, he was super-friendly, and offered me a variety of 1/2 portions to sample.  I tasted the previously mentioned boudin balls, which are made with rice, and pork sausage, then deep-fried and served with a small amount of mustard, syrup, and fresh thyme (they were truly fucking amazing.  I crave them), 1/2  a fried-chicken sandwich and 1/2 a pulled pork sandwich (both were excellent.  I especially dug the chicken, because I love chicken and it was done perfectly), and some of his mac 'n' cheese with béchamel, which was outstanding.  Maybe some of the best mac 'n' cheese in town.  Maybe.  One day I'll have to do a taste test to determine that, but for now, I'm going to give Dano's mac 'n' cheese super-high grades.

I strongly recommend Dano's truck, and I'm personally going to make an effort to eat at the various food trucks in Asheville a little more frequently.  I'll interview some more food truck people in the future too, along with all the various owners, chefs, servers, suppliers, growers, retailers, etc etc in the AVL food scene.  I'll try to mix it up for you guys.

(Check out my blog too! http://stuhelmthefoodcritic.blogspot.com/)