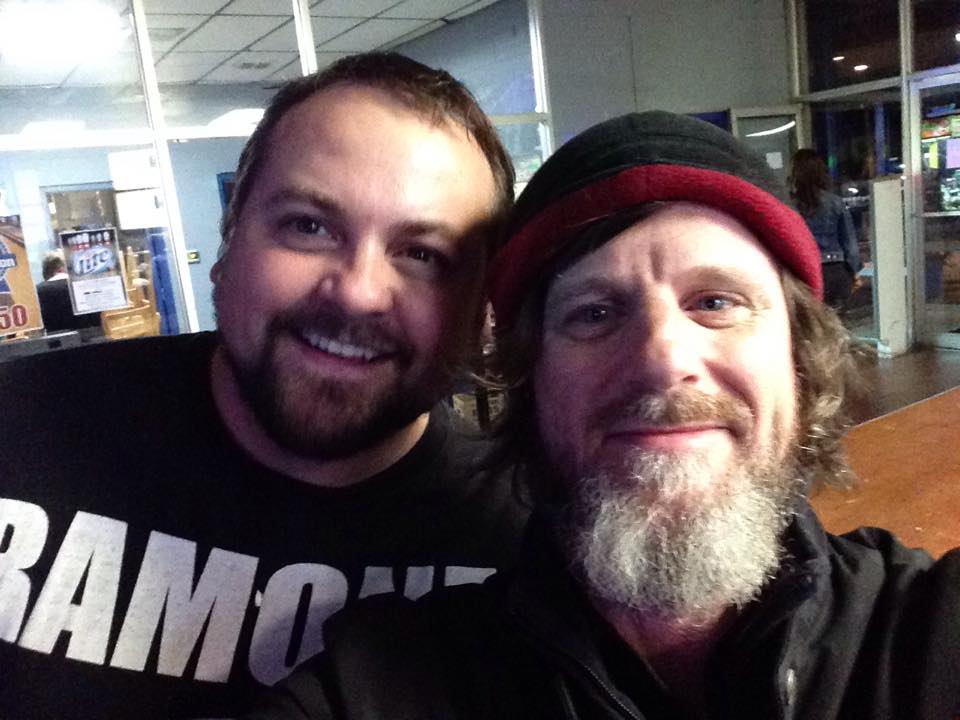 You guys know Mike Moore, right?  No, not "Columbine" Mike Moore, I'm talking about Chef Mike Moore, owner and chef at Seven Sows restaurant, as well as founding member, along with Darlene Moore (they are married) of the Blind Pig Supper Club.
I first met Mike and Darlene in person at one of the Blind Pig suppers, which you can read about HERE. That night was not only a fun, unique, and delicious experience for those who attended, but it benefitted a charity, as does each Blind Pig event.  Nice.  I like that.  I like these people.  They're nice.
I also like Seven Sows Bourbon and Larder.  The first time I went, I was served a clunker, and panned the meal.  Mike wrote me a super nice note, being apologetic, offering me a refund, but also defending his food and staff.  He invited me back.  I paid a surprise visit, and enjoyed my meal very much!  I gave it a very good review.  I've been back several times, and have enjoyed it very much each time.  That first one must have been a fluke.  That happens.
Anyhoo, another thing that I like is Facebook!  That's where I saw a post that Mike Made about a lady who called Seven Sows to make a reservation, but asked if it was OK to bring her kids.  Mike was bummed.  Why wouldn't a person feel comfortable bringing their kids to his venue?  He asked Facebook for answers.
The post got a lot of responses, from people with various opinions, and bits of advice for Mike.  I chimed-in, told him that I would bring him copies of my free kids' paper, Asheville Flyer for Kids every month, and help him spread the word about the family friendly nature of Seven Sows.
With that in mind, I typed up these questions on that topic, and Mike gave me some great answers!  Here's the usual 5 Q's...
STU HELM - Thank you for all the wonderful food, and good things you do! I read a post on your Facebook page that you would like for people to know that Seven Sows is a family friendly restaurant. Can you tell the readers about that particular Facebook post, and the phone call that prompted it?
MIKE MOORE - So yeah, I took a guest reservation by telephone the other week at my restaurant from a very nice lady from Maine visiting Asheville with her family, post the New Years holiday. She was recommended by others to dine with us and I was very happy to hear that. Toward the end of our conversation, she mentioned that she was visiting with her two children, one 6 years old and the other 8 and asked if it would be okay if they were brought to dinner. The question was just odd to me, I guess, and was initially met by me with a bit of a chuckle followed by an 'absolutely, any children are always welcome with us.' I wrote down the reservation and hung up with her and the question stuck in my head most of the rest of the day as I prepped the evening menu in the kitchen.
It's interesting if you think about it. I mean I understand that the question was very simple and this lady was probably just trying to get a gauge on what level of fine dining we are, or to could have been the 'bourbon' in our sub name that threw her. Regardless, In a lot of cities and areas, I guess the presence of children, in an independently owned restaurant, are not necessarily customary. There are family restaurants and there are fine dining restaurants -- and there's that defining line drawn in the sand with what is socially acceptable. It's an interesting thing to think about today, really.
In my perfect world mind- I'd love to see more children dining with their parents on good, hand built food. I guess that could be my own guilt for not being able to cook for my own family every night because I'm working. Anyway, thats all any chef wants to do -- cook and make people happy. Do I want to put quarter kiddie rides in by the bathroom or skee ball machines near the host stand? No, but I could play skee ball for hours. I just think it would be pretty cool to build a bridge -- challenge a social norm if you will.
I'm not trying to make some national statement -- but I would like for the public to know that they can bring children to my restaurant.
It's awesome when I have someone reach out to me and say that their 12 year old daughter's favorite restaurant is my own. I would love for that to happen more often and I'm sure every other chef in town would as well. I can recall my own food memories as a child that influenced me -- and they started while I was pretty young. My folks would take me to restaurants on weekend nights once I was old enough not to throw my food across the room, and sit well behaved. I remember being taught some simple finer dining lessons about that curious 'salad fork,' and the tastes of foods that were new to me, which I could only get in that certain restaurant.
This Summer, my son and I cooked a whole hog together for the first time. He seasoned it as I got the burn barrel ready and he shoveled hot coals underneath it and later that night he ate the crispy skin for the first time with that soft layer of fat underneath. You should have seen the look on his face -- I love having my kids try something new and delicious for the first time. It is a lesson in where food comes from and it is character building. It's up to the parents to build wisdom and good character.

STU - What were some of the responses to that post, and what changes, if any, will be made at Seven Sows as a result of the call, the post, and the responses to it?
MIKE - I didn't expect for it to have the overwhelming response that it did -- but a lot of folks chimed in and with some interesting points about children's menus in Asheville. Mountain Xpress "Best Of" each year only has one restaurant voted in that category per year (year over year I believe) -- why is that, they, wondered?
Again, it's an interesting thought -- and it could mean that a kids' menu to some restaurants can sometimes be sort of like that passive dessert menu -- I'm guilty of this when I say some restaurants. Our kids' menu has been pretty simple and pretty plain -- of course they can order anything they like but kids' menus are abundant in chicken fingers, and mac 'n' cheese, or fries.
This whole response propagated my thoughts on our own children's menu -- the next day I went in to the kitchen and pulled together our Chef De Cuisine and Sous Chef with a challenge that week to build a hand crafted kids' menu.
We all stood there over black coffee in the kitchen and talked about what our favorite things to eat where as kids. Before I knew it, Nick was pulling frozen diver scallops out of the freezer and making a mousseline bonded with béchamel- freezing them then rolling them in seasoned panko. 'Fish Sticks' it was.
Todd took meat from organic chicken thighs with carrots, celery and peas, and hand-rolled the most delicious pate brisee dough making hand pies. This is the start of our new kids' menu - and it's free.

STU - You said your kids' menu is free? That's incredibly generous. What's else is on the menu, and how the heck can Seven Sows, or any restaurant afford, to give away free food?
MIKE - Kids 12 and under will eat free with the purchase of two small plates or one entree. Our kids menu right now is comprised of what our own personal fav's were -- Fish Sticks and French Fries (Not Gorton Fishermans), Handmade Chicken Pot Pies, Soup & Sandwich with a really good grilled cheese, Red Beans & Rice with a local Greens Salad -- simple, tasty and built really well. 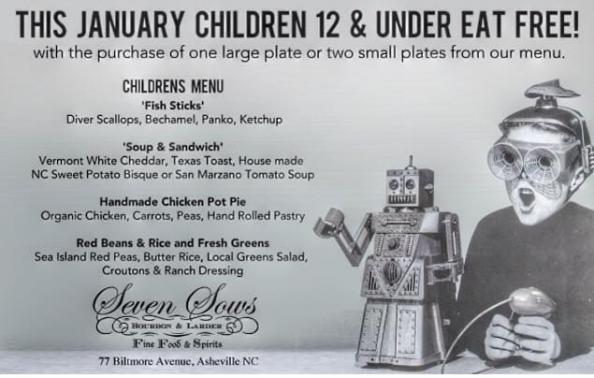 STU - As you noted above, Seven Sows actually has the word "bourbon" in it's title (Seven Sows Bourbon & Larder), do you think parents will be concerned that they are bringing their children into a bar? Should they be? Some kids grow-up sitting at the end of a bar, watching their parental units drink, and that's not only sad, but can perpetuate generational alcohol abuse. What's the bar-to-restaurant ratio like at Seven Sows? Would you classify it as a "drinking establishment?"
MIKE- We've always been a restaurant first -- I wouldn't classify us strictly as a bar at all. We do love to feature bourbon and whiskeys at our bar and we have an excellent cocktail program.  On the other hand, If Chuck E. Cheese had mixologists shaking drinks, or Pappy Van Winkle with one large cube of ice, I think every hipster and food lover in town would be all over it. C'mon, You know you'd review the hell out of that place, Dude.
STU - Final questio...  wait, did you just call me a "hipster?"  Ha ha ha!  I've been called worse...  I am a childless loser after all, and well-known for making jokes about hating to dine out with other people's children running amok in the restaurant, but the fact is, my parents took us out to eat a lot when I was a kid, and I do think it's a fun and important part of growing up! How will Seven Sows deal with unruliness, and why do you personally think it's a good idea for parents to dine out with their kids?
MIKE - First off, you can borrow my kids any day, Stu. Secondly, Well, I guess personally for me, It was a big part of my childhood. My folks opened my mind to other foods in restaurants numerous times as a kid. I learned table side manners both at home and at restaurants and it was fun and I have lots of food memories from Southern fish fry joints to Chinese to fancy steak houses. Ask Elliott Moss how important food memories were for him in creating what he does and will continue to do today!
STU - Thanks for your answers, Mike, I really appreciate you, have a great day!
MIKE - Thanks Stu! Awesome chatting with you the other day. The coloring books (Asheville Flyer for Kids) were a hit this weekend- thank you for bringing those by! Hope you had an excellent weekend!

So, there you have it, Facebook started a conversation that lead to free, healthy food for kids!  Way to go, Mr. Zuckerberg!  And way to go, Mr. Moore.  Nice guy.  Great chef.  Gives a shit about kids, and good food.
You gotta love that.
I would like to compile a big list of independent restaurants around town that offer a free kids menu, or a "kids eat free" night.  I'd like to publish that list as a resource for parents on the Asheville Flyer for Kids web page, as well as in our paper, as a nice, big, colorful, poster-sized list of venues, days, times, etc, perfect for the refrigerator door.
I'd like to hear directly from any and all owners, managers, and chefs who offer such discounts for kids and families.  My email address is afkavl@gmail.com
I'd only like to hear from official representatives of the venues, please, so as to ensure that I get the right info.  Gotta get the kids the right info.
ALSO:  To the general Asheville Grit readership: I'm thinking about trying some kids menus myself from around town, and giving them a review.  What are your own kids' faves?  Please use the comments section below to recommend kids menus for me to try!